Walkthrough for Vigil: The Longest Night features a detailed guide that aims to help players complete all the locations and sub-areas, as well as guides on enemies, bosses, NPCs, and items that are encountered in the game. This page will mainly focus on providing a detailed walkthrough for the main campaign or story of Vigil: The Longest Night. For guides on quests, click here, if you want to check an overview for a recommended progress path, you may visit our Game Progress Route page.

Mountain Pass (Prologue) is a Location in Vigil: The Longest Night. Please see Walkthrough for other areas. The Mountain Pass is the first location of the game where Leila begins her journey back to Maye Town, this area also serves as the tutorial section that provides information on the basic controls of movement and combat.

Leila returns from her training to become a Vigilant and travels back to Maye Town to find meet up with her sister Daisy. As Leila arrives at the mountain pass, she meets a suspicious wanderer who appears in front of her and tells her that she must take on the trial to end "the ritual".

After the short cinematic upon starting a new game, players will first arrive in the Mountain Pass where they will officially play and take control of the game's protagonist, Leila. Investigate the glowing item on the ground to open up a tutorial window that shows the basic controls for movement and combat. Once you've read it, proceed forward and an NPC will appear before Leila, this NPC is The Lantern Keeper who tells Leila that her arrival is perfect and that she must take on the trial to end the ritual. After speaking to the mysterious character, you'll obtain x1 Owl's Feather which is your first Arcane Item - the Owl's Feather will transport you back to the last Owl Statue that you've used or visited.

Continue straight and press the jump button to avoid the spikes on the ground, you'll find the first Owl Statue just up ahead which you can use to Save, Load, and teleport to other discovered Owl Statues, also, next to it is a glowing item on the ground that you can interact with to check the tutorial about using Owl Statues. If ever you find yourself in a sticky situation, use an Owl's Feather to teleport you back to the last statue you used. Whenever you use an Owl Statue, your game is automatically saved, Leila's HP is replenished, and all Enemies around the area will respawn. Your Healing Potions will not be replenished, as they are finite Consumables which have be looted or purchasing from Merchants.

Once you're done, continue down the path where you'll see a spinning mechanism that's covered in spikes. You'll see another glowing item on the ground that you can check to see the tutorial on how to use the backstep and roll mechanic. After reading it, press the corresponding button to roll underneath the spikes.

Next, you'll encounter your first batch of Enemies ahead of you. First, you'll want to jump and climb to the platform above where you'll see a Giant Mouse, kill it to obtain EXP and Gold. Continue forward and you'll see a Beast Hunter wielding a Beast Hunter's Maul. Kill it, and then open the chest behind the enemy to find 100 Gold. After opening the chest, go back down and continue forward where you'll encounter another Giant Mouse. Killing the three enemies should yield you 1 Skill Point to unlock your first Skill, you have the freedom to unlock whichever skill you want from 5 Skill Trees - continue going straight and interact with the glowing item on the ground to find another tutorial on how to jump down and through platforms.

At the bottom, head west, and you'll see yet another glowing item that indicates a tutorial on how to climb ladders. Climb down the broken ladder, jump down the platform below you and make sure to look down to check the surroundings below you. Make it a habit to always check your surroundings first before you proceed further because you might fall for a trap or get ambushed by enemies. Just below you, you'll find a couple of Giant Mice walking around. Head down and try to kill all the rats first to obtain EXP and Gold, you'll find about two more of these mice on the west side of the path, after clearing the area continue east and pick up x2 Healing Potion that's on the small table next to the glowing item on the ground. Read the tutorial on Stamina Control and then continue forward and head down the path where you'll see a beast running through the woods behind Leila. Before proceeding forward, pick up Fledgling's Blood Souls x1 on the ground. Fledgling's Blood Soul is a Consumable that creates an autosave when used, allowing you to save pretty much anywhere, for example right in front of a Boss arena. They're also used as a currency to respec Leila's skills.

Note: Owl Statue 's autosave feature uses the same slot as Fledgling's Blood Soul, so using either will overwrite previously created autosave. And while Fledgling's Blood Souls aren't exactly a scarce resource, there's a limited number of them available per playthrough, so it is possible to run out of them. Do not forget to save manually!

It's time to test your skills in combat and battle the first boss of the game, The Craving Terror. This boss is a large mutated beast and uses its gaping mouth to devour its targets. Fighting this boss is easy especially if you quickly find its weak spot, and that spot is its backside. In order to punish this boss, you'll want to make sure that you always position yourself behind it because it can't attack you from behind and it takes a second for it to face you and try to attack you with its mouth and paws. You'll find a list of its attacks to better understand on how to counter it:

You can easily defeat this boss if you keep in mind to position yourself behind the beast and make sure not to overdo it when attacking it, you still need to watch out for the rest of its attacks. Defeating this boss yields EXP, Gold, x1 Withered Flower Ring for Leila, and unlocks the Night Hunter achievement for the player.

After defeating the boss, continue straight and you'll find another tutorial on how to jump and climb platforms. Before leaving the area, The Lantern Keeper will reappear and tells Leila clues about ending the "nightmare". You'll receive a Quest entitled Vigilant's Trial that can be found in Leila's Notes on the side menu - once you've read it, proceed to the next area which is the Maye Bridge.

After certain conditions are met following changes happen to this area: 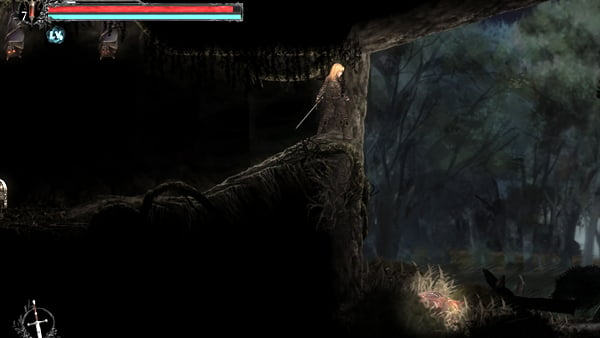