Secret Trail and Secret Cave (Prologue) is a Location in Vigil: The Longest Night. Please see Walkthrough for other areas.

Right at the area's entrance you will get ambushed by two Ghouls hiding in trees, and behind them is a giant pit trap filled with Giant Mice. If you have trouble fighting Ghouls you can lure them into the pit, they won't be able to get out. At the pit's western wall you will find Healing Potion x1. Climb the latter above and break the rubble that blocks the exit, then climb a sticking out tree branch and you will find yourself on a small man-made bridge occupied by a pagan trio - Cole, Mienz, and Lite. All three have the exact same cryptic dialogue to share. 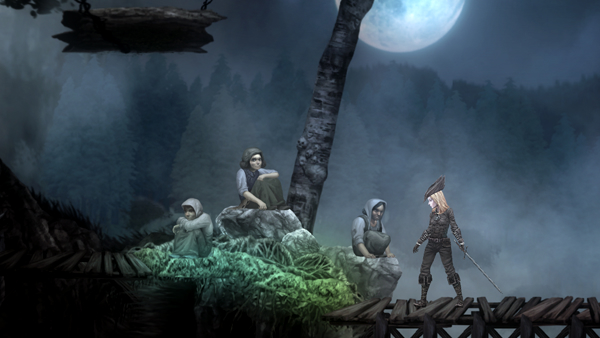 Climb up using the suspended logs on the left side of the bridge and continue moving forward, getting rid of sneaky Ghoul in the process. At the end of the trail is an inconspicuous door adored with pagan symbols and guarded by a lone Beast Hunter who, for some reason, is watching the door...which is nailed shut from the outside?.. Dispose of him and hit the door to break it. 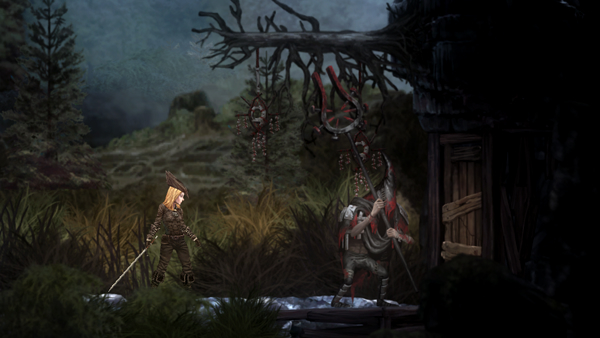 At the bottom of the stairs you will find a tutorial that explains how to use elevators, conveniently placed right next to one. Which doesn't appear to be working. Turn back and head another way. Further in the corridor you will encounter a new enemy, a mutilated Spike Hound, which attacks by sticking out its spikes. Don't stay too close to one when it's in the middle of a death animation, as it will hurt you with its last spike expansion. Past the breakable door is another new enemy called Louse Man. In a melee range Louse Men violently swing their arms, dealing physical damage, and when Leila is a bit further away they shoot lice which cause bleeding and sap Leila's HP for some time. After dealing with that Louse Man and descending the ladded you will find yourself in a room with a couple of bloody torture devices and rows of suspicious bottles. Grab Healing Potion x1 from the floor, and kill Beast Hunter and his Spike Hound. Behind yet another breakable door, in a smaller room filled with even more questionable stuff, an Experimental Subject hangs from the ceiling, strapped to a strange device - without doubt, one of many missing people that Thurber W. Sungi spoke of. Unlike their walking counterparts, Experimental Subjects are entirely docile and do not react to being attacked. Kill it or leave it, pick up Elevator Lever and head back to the elevator. Upon descending you will find yourself in a spaceous, mostly empty cavern. Past the bottom set of stairs is a locked door. The upper set will lead you to A7 Owl Statue. 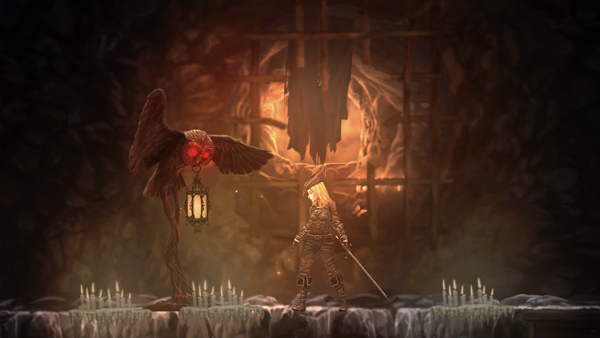 After activating the statue drop down from the wooden bridge on either side into the corpse pit underneath it. There you will find Fledgling's Blood Soul x1 and Percival's Boots. Climb back up and head left, further into the Secret Cave.

Call down the elevator and ride it all the way up (don't bother with the door halfway through, it is locked for now), then climb the ladder and kill Spike Hound that guards the chest hidden behind some breakable crates. In the chest you will find Gold x100. Next to the chest is a Sloppily Written Note - 1, reading which rewards Leila with Mysterious Manuscript x1. On the next platform is a Louse Man, if you struggle to beat him just wait for him to walk off the platform. Same for the next one with two more Louse Men. Descend the wooden stairs, kill a Beast Hunter on the right side, and pick up Braided Rope of Bitter Vines x1. Braided Rope of Bitter Vines is a key item that raises Leila's stamina as long as it is in the player's inventory.

Go back and drop down from a set of wooden platforms. In a small room on the right you will find a Louse Man, a Beast Hunter, and an Experimental Subject. After they're dealt with pick up Bruna's Diary, Part 1 from one of mutilated corpses. Well, either we've found the girl, or she needs to watch her belongings better. Head back outside and further down, underneath the wooden platform lies Cave Key which can be used to unlock the door beside the elevator. Head downstairs, and you will find the second elevator, once again missing a lever. Further down and past some enemies you will eventually reach a sacrifical altar with a giant axe stuck in it. Investigate the altar to read Sloppily Written Note - 3 and obtain Mysterious Manuscript x1. 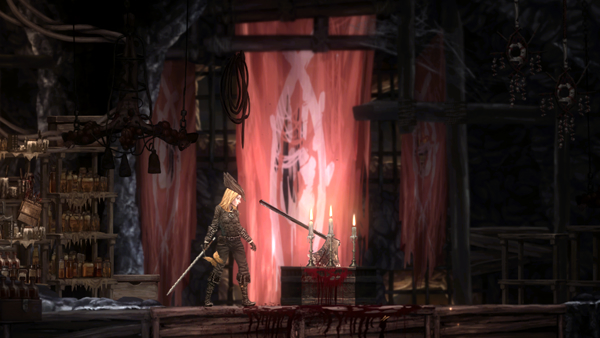 On the right side of the altar Elevator Lever can be found. Before heading further down, backtrack to the elevator, install the lever, and ride it all the way up. The elevator will bring you to a small secret area that hides Healing Potion x1, Percival's Gloves, and Small Shimmer Stone x1. While you're at it, head back to the locked door at the start of the area. Behind it you will find Emerald Ring. When you're done collecting missed items return to the altar and drop down from the wooden platform it stands on. Below it you will find Bruna's Diary, Part 2. Seems like Bruna really is bad at keeping her belongings safe, but their placement is still rather concerting. Either way we're done here. Up ahead is the exit that leads back to the Secret Cave's entrance. If previously you have watched the cutscene in Leila and Daisy's home and spoke to Professor in both locations (note: needs further confirmation, there might be other triggers), as you enter a cutscene will play in which Professor laments his lack of success with human experimentation. After watching the cutscene unlock the door on the upper pathway, which is a shortcut back to the main cave with the Owl Statue, and save the game before proceeding further. 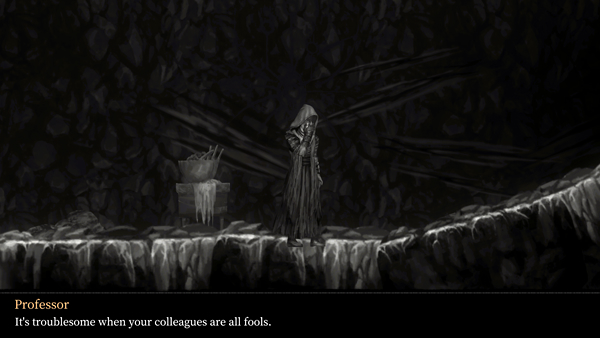 Point of no return: This is the game's first point of no return. Before you continue make sure to speak to Isabella in Outskirts of Maye. That encounter is required for one of the game's endings, and becomes unavailable after you beat the second boss.

Upgrade your gear, grind some levels if you need, and head underground to meet your second boss - Brood Mother. 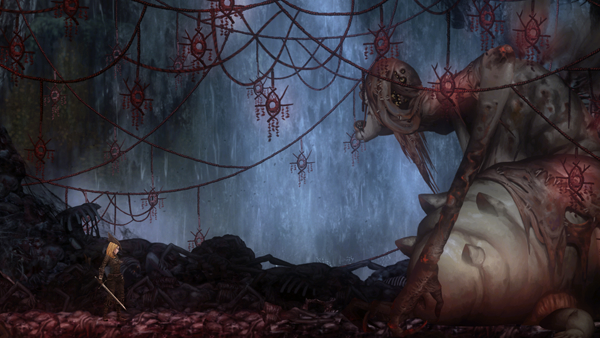 After Brood Mother is defeated, Leila will obtain the Double Jump ability, as well as Ruby Necklace. The Ghost will appear, confirming the horrible (but not very surprising) truth: Brood Mother was the missing girl, Bruna. After thanking Leila the Ghost will direct her to the Cemetery and give her Cemetery Key. At the exit from the boss arena Leila will once again be stopped by The Lantern Keeper. After speaking to him use Leila's new ability to reach the upper platform and collect Percival's Coat from the chest and Healing Potion x1. After you exit Secret Trail you will meet Isabella who will gift Leila Grapefruit Hat - provided that you had spoken to her in Maye Outskirts prior to beating Brood Mother.

After certain conditions are met following changes happen in this area: 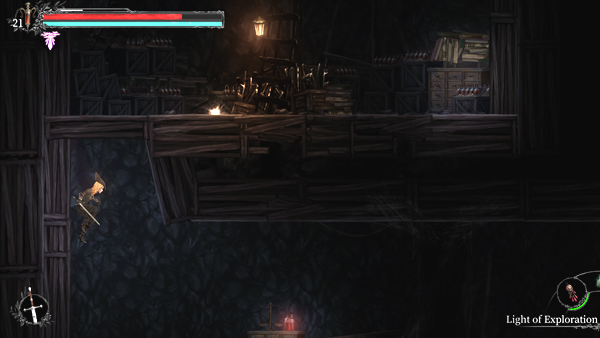 With  Rejuvenation skill unlocked it is becomes possible to survive the fall from the bridge that Cole, Mienz, Lite are sitting on, and fight Brood Mother without going through the cave. Doing that does not break the game in any way.