Maye Town (Prologue) is a Location in Vigil: The Longest Night. Please see Walkthrough for other areas. Maye Town acts as the main hub of the game, it is Leila's hometown and is the central section that connects the outskirts of Maye. In this town, Leila can meet various characters, visit other settlements that offer goods and services.

Leila finds that the path of Maye Bridge leading to the gates has been reinforced to protect the town and its citizens from the monsters lurking outside the settlement. As a new vigilant, Leila uses her training to maneuver underneath the bridge and was able to reach the gates. However, it seems that her arrival is a terrible time due to the unfortunate events that are spiraling around the townsfolk of Maye.

Upon entering Maye Town, a cutscene will immediately trigger where you'll find Tangerine, the mother of Bruna who has gone missing. You'll see her begging for help from the Vice Captain to see the town's head as well as two nosy folks Adam and Giza who are watching and gossiping about the disappearance of Bruna. After the cutscene, speak to the Vice Captain who is standing by the entrance. He'll tell you that returning to Maye is a bad time since it's all chaos and mentions that Leila could help by getting rid of the beast that's been stalking the town, and that beast, is The Craving Terror that you've defeated earlier - since you've defeated the beast already, Leila's notes will automatically update after speaking to the Vice Captain and you'll obtain a miscellaneous quest Inform the Captain which, of course, is to inform the captain of the current situation.

Important: make sure to speak to Vice Captain before you leave Maye Town, otherwise you will miss the quest and its reward permanently.

Near the town's entrance, head to the Gate Outpost and look the Captain in his quarters at the top of the area. But before speaking to the captain, make sure to check the first and second floor first and speak to the NPCs and check the area for loot. On the first floor, you'll find Jeremy who is guarding a storeroom. On the second floor, you'll find a drunk guard named Steve who's standing by the balcony on the west side. Speak to him and Leila will hand over the Stinky Helmet that you found under Maye Bridge, he'll give you x1 Collection of Duran's Letters that can be given to Duran who's outside the gate of Maye Bridge and Leila's notes of the Glorious Guard will be updated. Still, on the same floor, head east, speak to Joseph who's the guard sitting, and then check the end to find of the floor to find x5 Molotov.

Head up the last floor and go inside the Captain Carl's quarters and speak to him. The captain will be pleased to see Leila and will tell her about the disappearance of Bruna. as well as thanking her for killing the beast that's stalking the town. You'll be rewarded with x1 Iron Halberd and Leila's notes will be updated. You've cleared this area, now go back down and explore Maye Town.

Just next to the entrance of the gate's outpost, you'll find Idonea's Shop which is on the right side. Idonea is the town's general merchant where you can sell items and purchase some consumable items. You'll also find an Owl Statue here, make sure you activate it to unlock its fast travel point. Next, to Idonea's Shop on the right is the Smithy.

The smithy is the town's local blacksmith where you'll be able to ask for Zachary to forge stronger equipment, enchant them with different effects, and to trade goods. There you can also find Isidora. a mysterious woman who refers to herself as the manager, if you want to store items and clear out space in your carrying space, then speak to Isidora so that she can keep the items for you.

Note: you can access and manage your stash from unlocked Owl Statues, so Isidora's services are a bit obsolete.

Continue your exploration within the town, on the right side from the Smithy, you'll find the Professor's Home. There's a locked door on the first floor and you'll need a key that you'll find later on to unlock it, for now, read the letter that's on the table, head to the second floor, and pick up x1 Healing Potion on the bed. Go back outside and check the next house on the right which is Mukddar's Home.

In this house, you'll find Mukddars sitting in the middle of the house. Speak to him and he'll tell you about a story about him losing his right hand. Make sure to talk to him three times to obtain his quest Best Audience which is simply a game of hide and seek. Before he leaves, he'll provide you with an Arcane Item, the Hand of Shadow, and Leila's notes will be updated. Make sure you read the notes to learn about clues regarding his hiding spot. If you notice by the entrance of the house, there's a platform that you can climb onto where you can open a chest - leave that for now since you can't reach it and return later once you have the double jump ability.

Next, check the next establishment which is the Tavern. Inside the tavern, you'll meet a few NPCs, next to the bar is a man named Swane who shares his thoughts about Vigilants. Head to the bottom section of the tavern and you'll see a bard named Quinn who's lying on the table. Speak to him to update Leila's notes regarding the disappearance of Bruna, you'll also find another Maye Guard named Steve who dares you to read the letters that aren't addressed to Leila and another man named Sing Hower who talks about Stein, the Gravekeeper, acting odder than usual - simply speak to all the NPCs in the tavern and then leave.

Now, visit your house which is beside the Tavern on the right. You'll find a woman named Silian who's standing outside and holding a cake, speak to her and she will ask you to give Daisy the Birthday Cake that she made. Head inside your house and another cutscene will trigger where Leila won't be able to find Daisy. Approach the table and read Daisy's Note, you'll see that Daisy's collecting some items which you'll need to find and Leila's notes will be updated with a new Quest line called Sister Daisy - head back outside town and if you want to purchase some alcoholic consumable drink, speak to Silian who's back in the Tavern.

Continue going straight from your home and check the last house in Maye Town which is the Supply Warehouse. Head inside and you'll find a man named Thurber W. Sungi who claims to be the best marksman in the capital. He mentions that the Emperor has sent him to investigate the case of people disappearing within Maye Town. Speaking to him will update Leila's notes and you'll obtain a new Quest line, the Royal Detective.

Before you proceed to the next area, if you haven't yet, return to the gates of Maye Bridge and speak to Duran so that you can provide him the Collection of Duran's Letters, when you're given a chance to respond to him, select "Indeed, nobody knows what kind of "door" they guarded." Leila hands over the letters to Duan and he'll reward you with the Rose Ring - the Glorious Guard quest line is still incomplete and you need to return to Duran later on, for now, return to the town and head east towards the next area, the Outskirts of Maye.

After certain conditions are met following changes happen in this area: 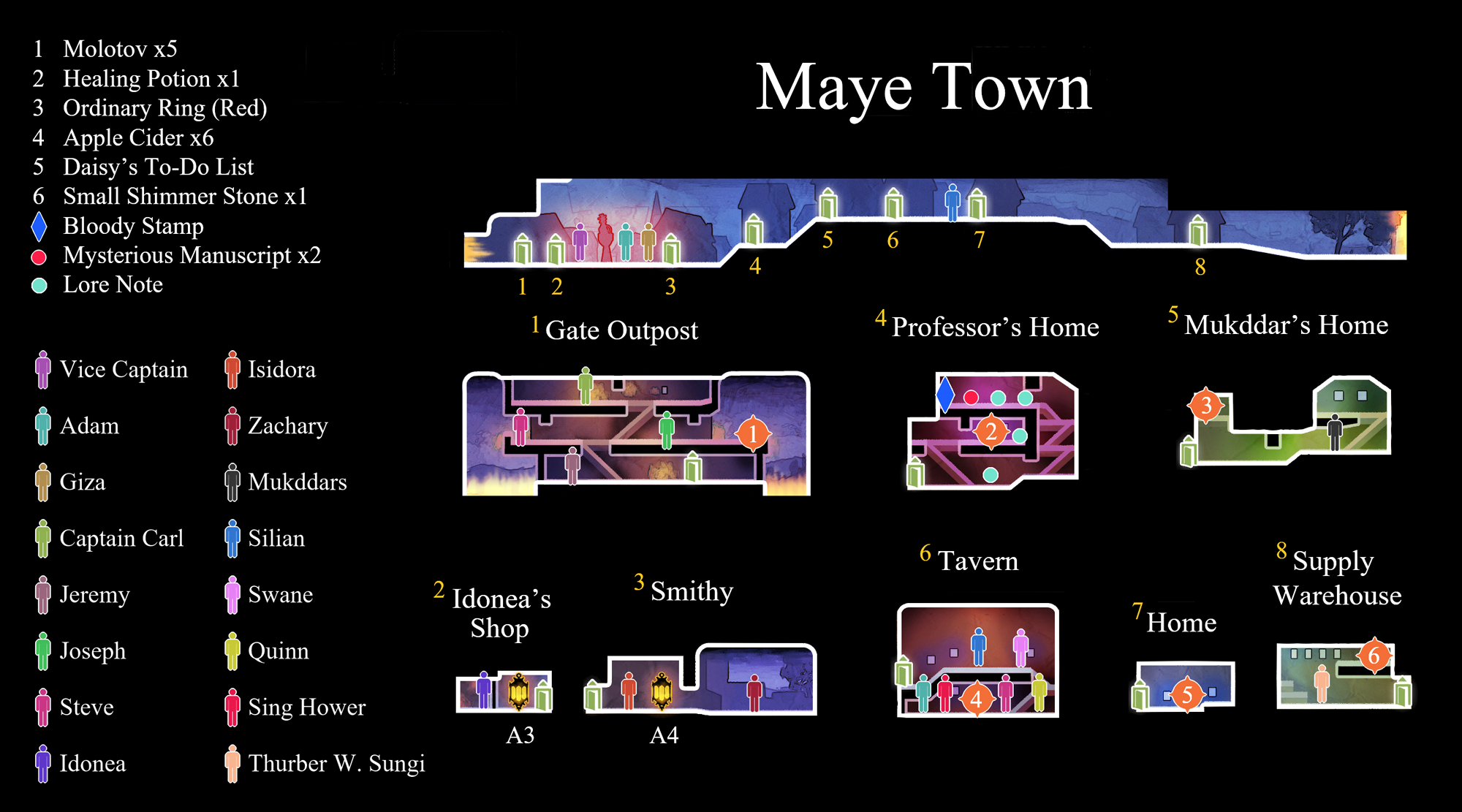